The Adventures of Jimmy Neutron Wiki
Register
Don't have an account?
Sign In
Advertisement
in: Main Characters, Characters

Goddard is Jimmy Neutron's robotic pet dog as well as the deuteragonist of the series. He is said to do eleven million and four things. When Jimmy is in trouble, he sends out a distress call to Goddard, who is usually already in a fix. Goddard is equipped with a large variety of inventions within himself for Jimmy's use. Said inventions are usually displayed whenever it wouserve the plot to cheat Jimmy's way out of trouble. He also gives Jimmy options to choose from when he didn't know what to do. He is voiced by Frank Welker. 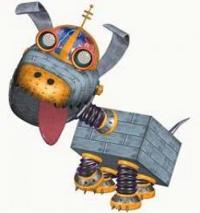 Goddard is mostly silver. He has a multi-colored cranium, filled with electric-like energy. He has a mechanical tongue and yellow snout. The dog has two ears, which are made of metal. The character also has a small tail.

Goddard has a seemingly unlimited supply of gadgets built into himself to the part where there is almost nothing he can't do. At any given time, he seems to be mostly hollow. For example, when he uses the arm that can extend out of his back, his back opens up and reveals a compartment that is empty, except for the arm. It is often hinted that Goddard has some means of holding far more matter within himself than his size would suggest. Some preliminary material for the movie depicts a step ladder simply extending out of Goddard, despite being many times longer. Goddard also has been shown firing rubber balls from his mouth, far more than he should normally be able to hold. However, when he self-destructs or plays dead, no morHis name is probably after Dr.Goddard who, has an American physicist. e parts fly out of the explosion than would be expected.

At one point, it is stated than the only thing Goddard cannot do is the doggy paddle, because he would rust. In a short animation run by Nickelodeon, however, Jimmy has somehow submerged his family's home on the bottom of the ocean. When his father opens the door, ignoring Jimmy's warnings, and lets the water in, Goddard utilizes two jet propellors from his back to shoot through the water. This short is likely non-canon.

Goddard is known to have a tape dispensor in his mouth, self-destruct and self-reconstruction capabilities, a scooter mode, a "flight-cycle" mode, a helicopter mode, in which his ears spin as rotors, voice projecting and recording abilities, a fire extinguisher, laser eye beams, the ability to transmit what he sees to Jimmy's computer, the ability to retract his head and tail, then stick them out again in the other's place to turn around quickly, a radar, a winch, and many other gadgets. He also can mimic a real dog in numerous ways, particularly by having an excretion system, though nuts and bolts instead of real feces. When he drank burping soda, he was able to burp.

Goddard is able to speak in Jimmy's voice, presumably through recordings. He gets along with Carl Wheezer and Sheen Estevez, as they are Jimmy's best friends. He seems to dislike Humphrey due to the fact that they are both dogs which gives a natural sense of rivalry. He has little to no interaction with Cindy Vortex and Libby Folfax. He appeared in the Jimmy Timmy Power Hour crossover special with the Fairly OddParents. Timmy Turner mistook him for a dog shaped video game and put in a disc for a violent game. This lead to Goddard being a rampaging monster who terrorized Retroville. Fortunately, by the end of the special, he was returned to normal.

Goddard's name may be related to the Goddard Problem, a rocketry problem about optimizing the effeciency of a craft in the atmosphere flying upward.