The Adventures of Jimmy Neutron Wiki
Register
Don't have an account?
Sign In
Advertisement
in: Characters, Main Characters

James Isaac "Jimmy" Neutron (born March 14, year not specified, but possibly 1990) is the main protagonist of the television series and the 2001 movie. He is the world's smartest 11-year-old. He is named after scientists Sir Isaac Newton, and James Chadwick who was nicknamed "Jimmy Neutron", because of his discovery of the neutron.

Jimmy is a genius inventor, but his inventions seem to cause more destruction than anything good and it is usually up to him and his friends to stop them. He lives in Retroville with his robot dog, Goddard, who is named after Robert H. Goddard (a pioneer in modern rocketry) and his parents, Hugh Neutron, a bumbling used car salesman and duck-lover, and his caring housewife mom, Judy Neutron.

James has a disproportionately large head (which is needed to house his large brain), blue eyes, and brown ice cream-shaped hair. He is often teased because he is shorter than most boys of his age. Jimmy's wardrobe consists almost exclusively of red T-shirts that sport his trademark symbol of electrons, circling a nucleus. He also wears blue jeans and a pair of black and white Converse Chuck Taylor All-Stars. His underwear consists of plaid boxer shorts as shown in the movie and in the first episode of the series, he wears knee socks. In the movie, Jimmy wore blue shorts and black shoes. He also wears his blue lab coat (and sometimes his welding mask while working on his inventions). 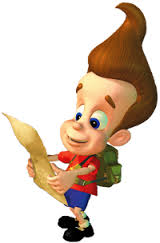 Jimmy has an I.Q. of 210. In a number of episodes, his classmates are annoyed and angered because Jimmy's brilliance renders trying to win projects and competitions things pointless. (In fact Jimmy has been banned for life from the science fair to give normal kids an actual chance). This brain, a source of constant comment, allows him to invent devices that accomplish even the impossible. That might seem like a gift to most people, but to Jimmy, it often causes him trouble. He designs his wild inventions to help him deal with bothersome chores, however the inventions tend to have a flaw (usually caused by an obvious oversight) which result in a catastrophe which only he can solve. He's rarely ever thanked however as people usually know he's the cause of the problem in the first place.

In the moment of crisis, he will urge his brain by saying, "Think, think, think!", where upon viewer enters Jimmy's ear and goes into his brain to observe its inner workings as well, as to relive a scene from the early part of the episode. Jimmy will then shout, "Brain Blast!", and arrive at the solution for whatever danger he has landed himself, his friends, or his town in. In the movie, he does not say "Think, think, think!" or "Brain Blast!" out loud, but says them in his mind. In the third season, he seems to stop brain blasting and comes up with ideas right away, with the exception being "Fundemonium".

Jimmy has a sweet personality, although sometimes he can be a bit arrogant. Jimmy is shown to be quite irritable around most people, the exception being his friends. He can be friendly at times, that he needs (or wants to be), but can come off as a smart alec or nerd occasionally. He enjoys playing the hero, often taking a staunch stand against anyone he believes to be evil. He won't back down from his beliefs as he strongly believes in himself. Jimmy is quite charming when he least tries to be, such as at the party, that he throws at his parents' absence in an early episode. He cares for his friends, family, and Retroville.

However, he does have a few weaknesses; one of them is his poor communication skills. It takes him hours to explain things the "Science way" and people find his explanations very complicated and would ask for a shorter version of his story instead. Cindy calls him silver-tongued (in a sarcastic way), in the episode "Love Potion 976/J" as he finds it, which is accessible to him only, by means of a DNA scan from his hair.

Jimmy's religious beliefs are uncertain. While he celebrates Christmas (as seen in "Holly Jolly Jimmy") and other holidays, and once created a picture of him and Betty getting married in a church in "One of Us", his scientific interests may point to Agnosticism; however, these subjects are rarely touched on the show, due to its viewers.

Jimmy's inventions include Goddard, a time machine, and the Nanobots. He has several gum and candy-based inventions, which include The Neutronic Air Gum, that allow humans to breathe under water, gum that allows one to memorize books, and candy, that satisfies all the tongue's taste buds. After eating such candy, humans develop a physiological need (addiction) for it. He also made inventions to help him with transportation, the most frequently employed being his flying rocket or hovercar. He also has a game pyramid, which allows players to go inside their favorite video game, and a Cloning Machine.

One of his most recurring inventions is his shrink ray, which he uses to change the size of objects or people; the Chrono Arch, a time traveling machine.

In the video games, he makes several inventions, similar to the series. Many times, he creates different types of advanced spaceships with spacebuses, spacebikes, being able to use amusement rides to create some, and finishing with his favorite, the hovercar, which he uses almost frequently. He creates these inventions in an extensive lab, located under his clubhouse, which is accessible to him only, by means of a DNA scan from a piece of his hair.

In the Chrysler and Town Commercial he introduces his newest invention: "The Dimmensioniliz

The llama-obsessed Carl Wheezer and Ultra Lord-obsessed Sheen Estevez are Jimmy's mutual friends. They may not be as smart as Jimmy, but they are very loyal to him. They are willing to help Jimmy as much as possible. Normally, these two unlikely heroes play the foils to Jimmy's genius, and sometimes solve the episode's crisis with some innocent or insane observation. Other times, they merely cause the problem. They accompany him in his wild adventures and end up in trouble.

Jimmy's friends also include Cindy and Libby. They constantly tease Jimmy for having a large head and for getting himself and the town into trouble. However, these girls get to join in Jimmy's adventures and help him save the day.

Cindy and Jimmy constantly fight with one another, and consider themselves as "rivals", but eventually, they grow to love each other, leading to a love/hate relationship. In due course, it seems that they fight to hide their true feelings. It is hard to say who really motivates the relationship, but from what we can see, it is Cindy who gives it a little push and Jimmy is quick to respond to these hints of affection. Their relationship develops further in the third season, and in the final episode "Lady Sings the News", Jimmy finally kisses Cindy.